How the Fastest-Growing Web Apps of 2016 Won Customers Over

Toronto, ON – January 9th 2016: Now that 2017 has arrived, the IT industry has a chance to look back at 2016 as a whole to gain insights on what worked and what didn’t the past 12 months. Zapier’s latest report, Web Apps That Ruled the Workplace in 2016, provides key findings on the fastest-growing new and established apps from last year. Here are BluEnt’s key takeaways from the report on what app developers need to know moving forward in 2017. 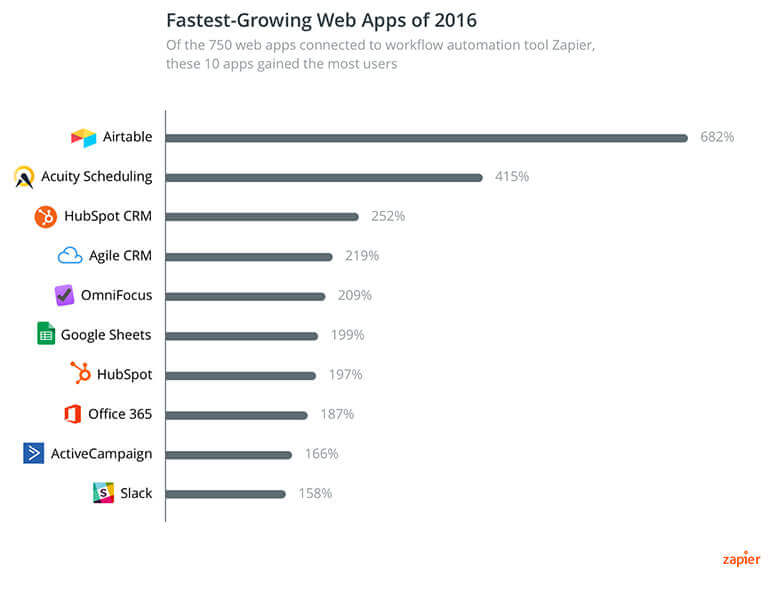 Now that we know which web apps topped the charts, let’s take a look at what made them so popular in 2016.

One trend Zapier identified was apps concerned with modernizing and simplifying workflows. Web applications like Airtable and Excel make it easy for employees to organize their data through spreadsheets and databases and run reports. The latest additions have streamlined the process of finding, syncing and sharing information more quickly. As a result, AirTable took the lead of established apps with an astonishing 682% growth.

Not far behind was Acuity Scheduling, a tool focused on booking appointments as efficiently as possible, which has had a profound impact on employee workflow and resulted in 415% of user growth.

Another trend in the fastest-growing web apps was traditional desktop software giving way for cloud computing. Office 365 has embedded collaboration in its functionality, allowing users to share emails, calendars, and all other core apps to an entire team in seconds. The user-friendliness of their design is the backbone of its 187% growth.

In a similar fashion, Google Sheets (199%) enables companies to move spreadsheets to the cloud and OmniFocus (209%) allows team tasks added to the app to be tracked through personal to-do lists.

Automation throughout the Marketing Funnel

Modern CRM apps and ad-tracking tools are extremely powerful. The latest features can give you stats on who has viewed your site, which ads they saw, who to contact and what their contact information is with the press of a button.

All the marketing apps presented in Zapier’s report like ConvertKit, ClickFunnels, Kajabi and Facebook Leads have to do with automating aspects of different stages in the marketing funnel. For example, Agile CRM helps to reach out to customers, ActiveCampaign restructures email campaign workflows, and HubsSpot’s CRM helps you track all of your marketing strategies’ performance. These apps enjoyed a user growth of 219%, 166%, and 197% respectively over the past year.

BluEnt’s IT services are aligned with Zapier’s findings going forward into 2017. We specialize in custom application development that enhances enterprise productivity and efficiency. This includes tools that automate general workflows such as enterprise timesheet management systems and Outlook plug-ins, but it also extends to marketing software.

From customer relationship management apps to automated software for newsletters and campaigns, we create solutions that enable your marketing department to make the most of their time effectively.

We also provide cost-effective cloud solutions that focus on enabling small to medium organizations accelerate business operations and maximize net profit by controlling administrative, operational and IT infrastructure costs throughout the organization. BluEnt’s team of developers has years of professional experience overseeing existing IT environments, analyzing the cost of integration with current processes and systems, and offering support in the cloud environment to bring technological innovation into the workplace.