Are Native Apps Better Than Their Hybrid Counterparts?

With the advent of the latest technologies and concepts, the newspapers, magazines, and storybooks are getting replaced by electronic gadgets and the mobile phone applications. Have you ever thought where our future stands? Let's understand the native apps and their hybrid counterparts in a better way.

Mobile phone apps are used to get the world as well as national news with ease. It even gives the live information about the status of traffic, critic reviews on the latest movies and restaurants, daily updates of your favorite celebrities, and the lists are never-ending. Since the mobile phone applications have entwined with our lives in an integral way, the developers try developing one without knowing the background of the same. This aspect happens to be the most important factor while developing an app.

The apps can be categorized into native and hybrid. There is a huge difference between the hybrid and native apps. >The native apps are specifically created for the platforms in its native language. For example, Java is used in Android apps, Objective C is used in iOS, and so on. On the other hand, the hybrid apps are compatible with a particular platform and are not universal.

How Does the Apps Reach General Public?

The native mobile applications are distributed among the general people with the help of app store and play store, whereas the non-native apps have a markup for the mobile phones. Native apps enable the developers to design the applications as per the demand. These apps are designed on a cross-platform and can be used in iOS, Android, as well as in Windows.

Most of the clients are inclined towards hybrid apps for its quick development procedure and lower budget. Even the app developers don't need to be expert to develop the hybrid app. However, it is important to understand the platform well to get an outstanding resultant app. 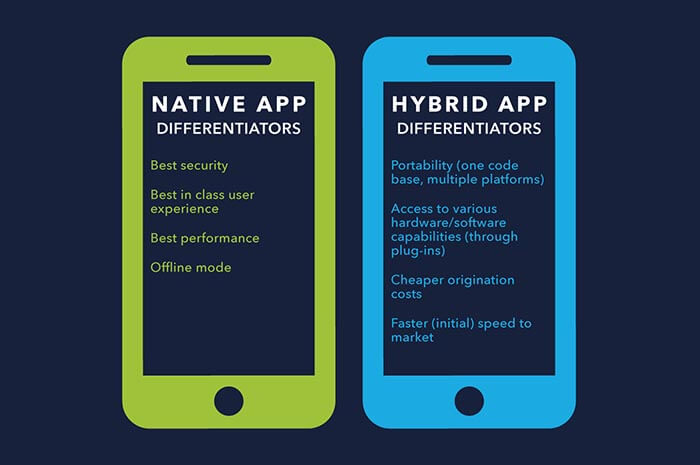 Why Does Hybrid Apps Fail?

The hybrid apps tend to fail because of the foreign inputs and difficult management of notifications. The developed apps work differently for iOS, Android, and Windows, which makes it highly difficult to interpret.

Safety Involved in the Hybrid Apps

The hybrid apps are very easy to decode. Hence, various levels of safety measures are needed to keep the codes secure from becoming public.

If you are going for a low-budget app in a short span of time, which doesn't demand high-level of expertise, then a hybrid app will suit the need. However, to develop a stable and secure app, which will make the user comfortable on any platform; it is advisable to go for the native apps.

BluEnt is a leading app development company where our professionals have the required experience and expertise to create custom-made apps for our clients. We cater to a wide variety of industries and deal with very simple to very complex projects with utmost responsibility.

Get in touch with us, for more information on Native and Hybrid Apps.