Home > Blog > A for Apple, A for Android - all you need to know about the two platforms

A for Apple, A for Android - all you need to know about the two platforms You may be an Apple user, or you may be an Android user - unknowingly or knowingly, that makes you a part of the whopping 98% market share these two capture. That being said, you need your app to cater to both of these individually strong and technologically different platforms.

Apple and Android phones differ in many ways. Functionality, Pricing and Design being 3 main differences. What might work for an iOS platform necessarily does not work for an android platform. If your app developer tells you otherwise, you should know there's some fishy business.

Here's a set of guidelines which will give you a deeper understanding about the individual platforms and reveal the blind-spots hiding in your company's app:

1) APP MAKING TOOLS: Both Apple and Android platforms have different tools to create an app.

2) LANGUAGE: English, Spanish, Mandarin or German? No. We are not talking about those languages.

Like humans, computers and mobiles communicate with each other in the form of different languages. Apple and Android platforms are no exception to this rule.

Not sure what all of this means? We can be your translators. Find out more here.

3) DESIGN: Both the platforms have a signature style that you need to adhere to when creating an app. Your app should look native to the different platforms. The basic design differences amongst the two are:

4) OPERATING SYSTEMS: Apple runs on Apple. Any purpose you would want your app to achieve, from developing to maintaining—it is a necessity to have a Mac and only Mac. Your iOS app cannot run on any other platform. However, an Android app is versatile in nature and can be created on Windows, Linux and even on Mac itself.

5) APP REVIEW: Before you can put out any app up in the iOS app store or Google Play, you have to get it reviewed:

6) INTEGRATED DEVELOPMENT ENVIRONMENT (IED): An IED is a software which facilitates application development. A typical IED software includes a code editor, data structure browsing (a.k.a the interpreter) and a debugger expedites the process of actions needed to be executed by an app developer. The graphical user interface (GUI) has overtaken the old menu-based interface of the past which makes an IED all the more appealing and maximize productivity, all in one go. Needless to say, both Apple and Android platforms have their own IED applications:

In Conclusion, let's take a look at this chart which covers up all of the topics mentioned above: 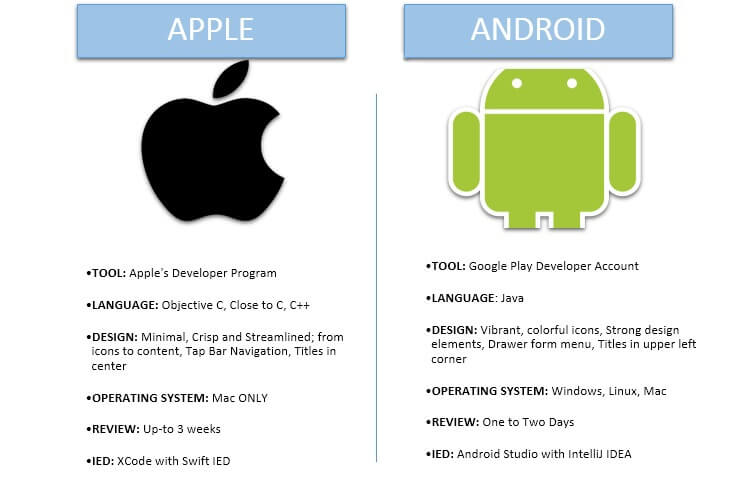 Feel lost because of all the technicality? Need professional assistance? Shoot us your queries here and we will be more than happy to assist you.