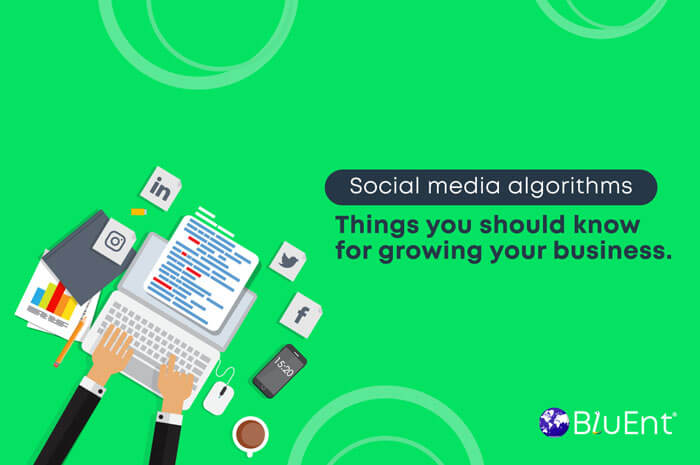 There was a time when the social media feed was purely chronological, and posts appeared according to their publishing date and time. There were no promoted elements in the feed citing user affiliations or interests.

Furthermore, no posts were kept off the feed just because user interaction was minimal or zero with previous posts from the author in the past.

These algorithms rank the posts according to relevance and not just according to the time they were posted on. This is done by gauging the engagement pattern of the users.

While it is seen as manipulative by some, the intention is solely to optimize the social media experience. For social media marketing, it poses a challenge for organic growth but aids in paid marketing campaigns.

On an average, 1.62 billion people visit Facebook every day across the globe. You can imagine the sheer amount of engagement occurring on the platform. Facebook is also used by brands for marketing & promotions. So, the fight for getting that valuable spot in the newsfeed is intense.

Facebook's algorithm is always changing, but it sticks to the core values of personal connection and meaningful engagement. The Facebook feed prioritizes some basic rules:

Engagement value of a post: The more engagement a post has garnered, the more likely it gets that Facebook will show it in the feeds. Facebook presumes such posts to be more interesting and keeps showing it to more people.

Type of posts: If you engage with a certain kind of post, you will see stories of similar kinds. Interests and affiliations play a major role here.

Time of posts: Last but not least, the age of the post is a crucial factor. Recent stories will rank higher whenever you log in the feed.

Approximately 500 million tweets are sent every day. On Twitter people tend to follow many accounts and the frequency of updates is high. Twitter earlier had a timeline structure, but gradually the total number of tweets became unmanageable to track in a timeline. Hence, algorithms were introduced.

Top tweets: These are the tweets sorted based on engagement parameters. These parameters are of two types. First, the number of retweets, clicks and impressions the tweet has received. Second, the user's engagement with the previous tweets from the same account.

Latest tweets: This model arranges the tweets in reverse chronological order, placing the most recent tweets on the top. To some extent, even this sorting is influenced by relevance factors and not all tweets are displayed in the timeline.

As the largest professional network in the world, LinkedIn has 310 million monthly active users. It also is the only social networking channel to have published helpful guidance with respect to its algorithms. LinkedIn is all about connections and online networking that help in business. It also is a great platform for B2B marketing.

Still, the feed is heavily influenced by an algorithm that can be defined in a few steps as a process:

Till the time the post keeps receiving sufficient engagement, it stays and gets distributed further.

Instagram is the most popular photo & video sharing app, with around 500 million daily active users. It also had a reverse chronological feed till 2016 but included algorithms after that.

Instagram does not hide or refrain content and mostly shows all the posts in the feed. But the rankings are highly influenced by six signals:

Interest: Past engagement analysis with posts, topics, and people.

Timing: The time at which the post was published.

Relationship: Closeness to the person/author of post measured by past interactions.

Frequency: How often the user checks the Instagram feed, since it will try to dish out the best of the posts.

Following: If the number of people being followed is large, then Instagram will pick stories from a wider selection of authors.

Usage: The length of an average session also determines what posts appear in the feed. The longer the duration, the higher the possibility of seeing more posts.

In social media optimization the dynamics of algorithms matter a lot. The average engagement rate on Facebook and LinkedIn is as low as 0.18 % & 0.54 % respectively.

To expand their reach, brands need to understand the algorithms first. Posting quality content regularly is essential, but to receive the deserved engagement, algorithms must be outdone.

Some buzz is initially needed to get noticed by algorithms. This could be in the form of paid marketing campaigns, or very intense organic mobilization. Both would require a lot of planning and effort.

BluEnt is a digital marketing company that has helped various brands to augment their social media presence with optimized strategies. If you want to make your presence felt on social media, call us now!